Games to get the Party Started!

Whip up some tasty appetizers, grab some friends and have a blast!

Let your party diva crown shine by adding some fun games to your next gathering. It’s a great ice breaker for new friends and a fun way to bring close friends and family together at gatherings.

Here are some of our favorite party games to try at your gathering.  Be sure to take pictures and use the hashtag #halladaysathome to be entered to win free stuff!

For example, “Whoa-oh, we’re living on a prayer” (Bon Jovi)…

The next song sung could be “When you call my name, it’s like a little PRAYER” (Madonna)…

With the song to follow that “Even on my weakest days, I get a LITTLE bit stronger” (Sara Evans) 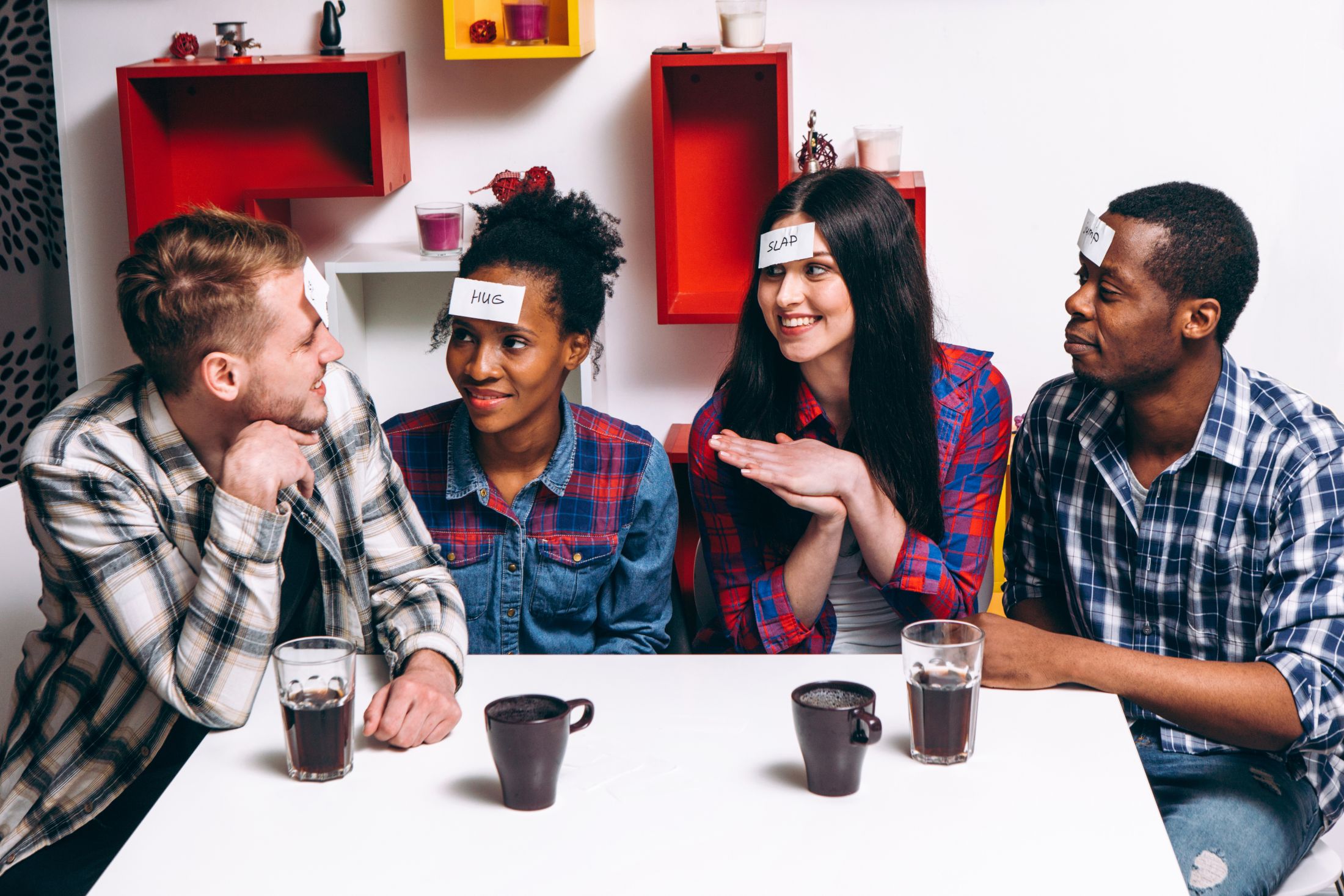 Unlike regular volleyball, using a balloon means you can play indoors without risk to furniture (or people).  You can also play by sitting on the floor.

React and Act involves some preparation; however, this is part of the fun! Pass out sheets of paper and pens to the players. Have each person write an event. Tell them to be creative! Examples of events can include:

Giants, Wizards, and Elves is an icebreaker that is similar to Rock, Paper, Scissors — except more hilarious! It’s also a versatile game — it works in groups of all sizes, including large groups of 50 or above.

This icebreaker game involves two teams and requires no special materials to play. It works both indoors Setup

This game involves two teams who will act as one of 3 characters: giants, wizards, and elves. When a player acts out a character, he or she does the specific hand motions and also makes the noise associated with the character.

Giants. Stand on your tippy toes, raise your arms like a giant, and make a menacing growling noise: “Rarrr!"

Wizards. Crouch slightly, as wizards are a bit shorter. Wave your fingers as though you’re casting a magical spell, and make a magical noise: “Shaazaam!"

Elves. Crouch down very low, cup your hands around your ears, and make a high pitched elf noise: “Eeeee!"

TWO TRUTHS AND A LIE

Recommended group size is: small, medium, or large. Works best with 6-10 people. Any indoor setting will work. No special materials are needed, although pencil and paper is optional. For all ages.

Setup
Take four of a kind out for as many people as you have (if you have 4 people playing, take out a set of ones, twos, threes and fours), there should be 4X the number of people you have.
Shuffle the cards. Pass them out until they are gone. Everyone should have 4 cards.
Put out the spoons. Enough for everyone, minus one.

King Elephant (also known as Animal Kingdom Game) is well suited as a good party game or an icebreaker for meetings. It involves a little bit of silliness and is a lot of fun. The goal of the game is to become the King Elephant, the head of the circle.

This active game works best if you have between 8 and 15 people. It is a good indoor game, and although it does require some movements (mainly making animal gestures), there is no running involved. No special props are required – it’s pretty simple to play! The recommended age is 10 and up.

Not much setup is required. Instruct all players to have a seat and arrange everyone in a circle, facing each other. Each seat in the circle will be a different animal, arranged in order from the top of the food chain (the King Elephant) down to the bottom of the food chain (a slimy worm). Designate one person to be the King Elephant and then assign the other animals in order. If you wish, you can let players choose their own animal and invent their own gesture for the animal. Otherwise, typical motions for the animals are:

Great fun! Be sure to get everyone to make funny animal sound effects when they do their signal too.

Uh oh, the patient is acting really strange! What illness does he or she have? The Strange Disease Diagnosis Game (which also goes by several other names, including the Mysterious Illness Game, Doctor Game, Psychiatrist Game, or Diagnosis Game) is a fun party game that involves some acting and guessing. It involves some improvisation and silliness. It works in different sized groups, although smaller groups of about 5-10 people is probably best.

This is a relatively easy drama game which may be improvised or may involve some rehearsal or preparation if you so wish. The easiest way to play this game is to have one person playing the doctor and the other people play the patients. The doctor is asked to leave the room and the patients decide what disease, illness or syndrome they all have. For example, the patients comes up with a strange syndrome or disease that they all think they are chickens, that they are Sarah Palin, that they are secret agents, or so on.

A great game to keep everyone on their toes.

Needed:  Post-It notes, Sellotape and a pen to play.

Add a fun theme, too. E.g. Got kicked out of a bar for having no pants on.